From the nXt materials tab, let's drop 'Cherry Natural-Low Gloss' onto the object.
When we now now render we see the orientation of the wood effect is not what's wanted.

It must be rotated 90° for a natural effect.

Before I describe in detail what not worked for me:

What is the right way to achieve that? I assume it must be quite simple, but I do not have success in here...

Replies to This Discussion

Flamingo woods are fractal materials. Mapping tools cannot be used to adjust them. Even if you rotate the object woth the material applied to it, the mapping orientation will remain fixed, so the result will be different in both objects when using images as textures then you have plenty of tools to adjust how it is applied to the object. 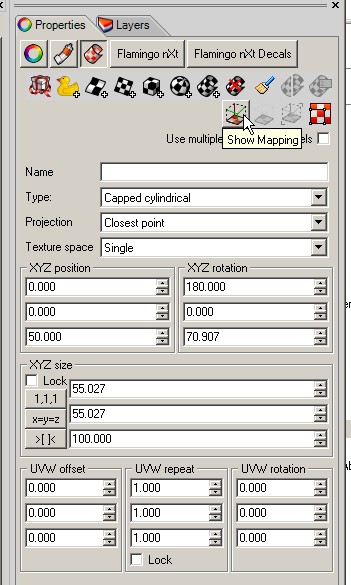 that makes the procedural materials more or less useless, right?

Ok, then I make a new textured material.
In the standard orientation I get what I do not want.
The orientation of my texture picture is not right.
So I rotate the mapping as you described in your reply.

But I get exactly the same... see pictures.

So I thought I have to edit my material.
Not so easy to find the rotation, it is under Advanced.
I rotated the picture by 90°, and the try to render now leads to crashing Rhino.

A question to your second picture:
How did you rotate the mapping widget? Seems I'm to dense.
Control points on doesn't let me select the widget, I typed in the rotation.

Opinions:
1.
First of all it is VERY confusing not beeing able to see the result in the Rhino viewport (rendered).
If V4 can't handle it, ok, but in V5 it should.
As said in another message, I do not understand why to develop nXt for V4.
No one will complain not having a brand new nXt in the 5 years old V4.

2.
The mapping is very complicated. It can't be true that me as an average user is not able to do the simplest things without asking for support. How should we do trainings then? There is no basic documentation...

3.
Also very confusing is in V5 there are tools, like the material editor or the ground plane, which do not have any effect on nXt. But they are still visible when nXt is the current renderer.


While nXt is a VERY promising renderer which I like a lot, especially comparing to Flamingo classic, some basic things should be cleaned up.
Especially the interface mixup with the Rhino Renderer and maybe others.


But back to the mapping:
What is the right way? 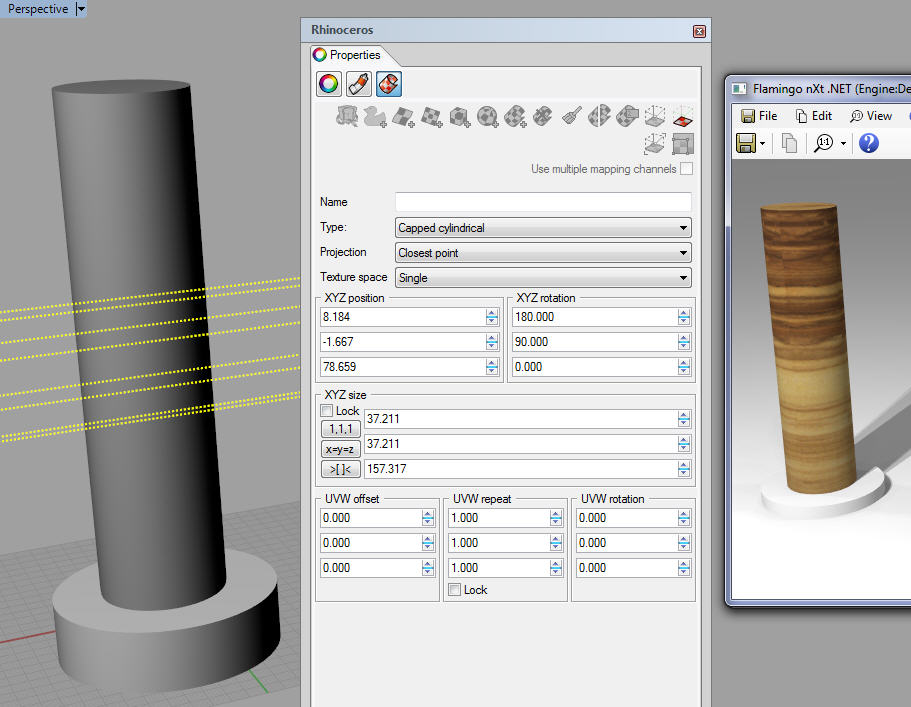 Hi charles, I do get different results here. I'm using Rhino 5, and also I can see the mapping in the rendered viewport. 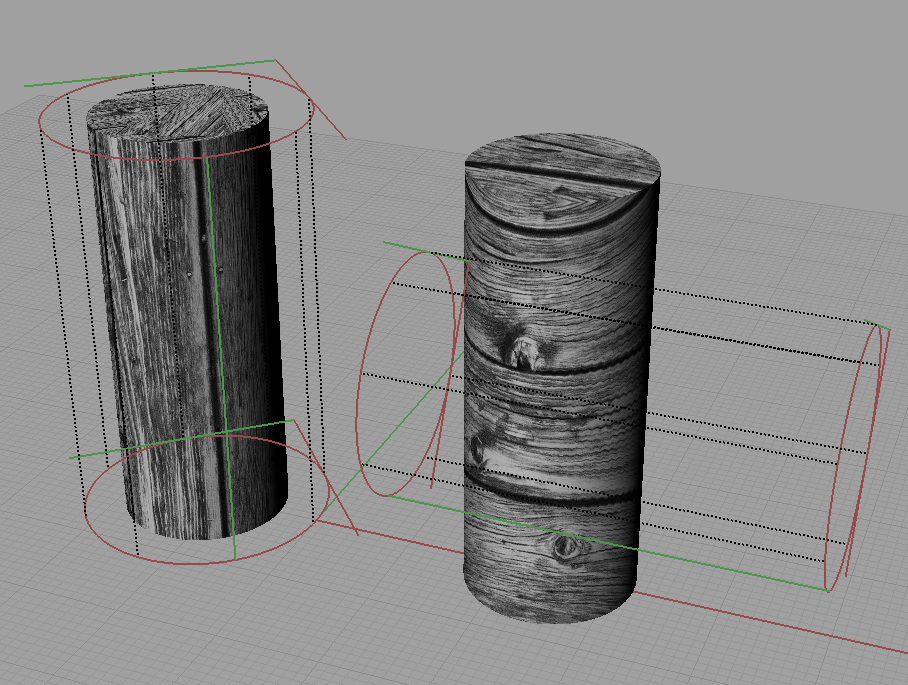 A question to your second picture:
How did you rotate the mapping widget? Seems I'm to dense.
Control points on doesn't let me select the widget, I typed in the rotation.

I've used rotate command to rotate the mmaping gizmo. And rotated it as a regular Rhino object.

> I've used rotate command to rotate the mmaping gizmo. And rotated it as a regular Rhino object.

That's what I tried as well, and it worked, but I could not snap to the points as seen in your picture.

I'm also using V5.
What have you done that you can see the preview in the viewport?

I tried this:
Freshly startes Rhino V5, current renderer is nXt.
Created the cylinder.
Created a 'New textured material', see picture.
Dropped this material on the cylinder.
Set the viewport to 'Rendered'.

Now I see a grey cylinder.
A test render proves the material is applied.

Now I select the cylinder and apply the cylindrical mapping.
Base is the lower center, radius is larger than the cylinder's diameter, end is upper center.

Now I click 'Show mapping' and rotate the widget by 90°.
A test render shows nothing has changed.

And, of course, I can't see anything of the texture in the viewport.

When Rhino Renderer is current, I can see the textures in the viewport.
But never with nXt.

What may I'm doing wrong? 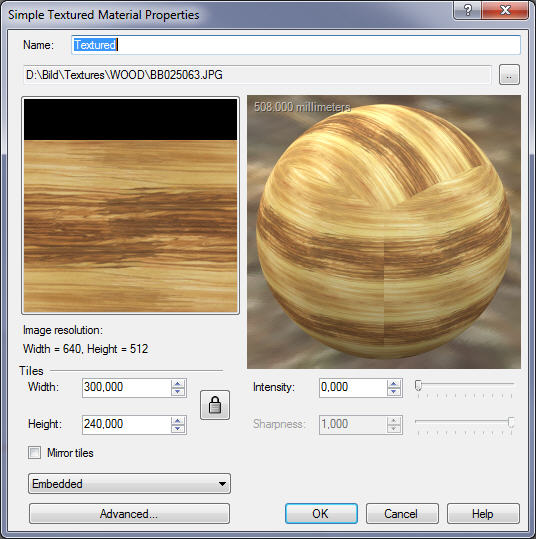 Hi Charles, sorry, I was using a RHino simple material, but rendered with Flamingo NXT. You can try it, select the object, the go to object properties, and material by object.

I will try to find out whats going on with flamingo NXt.

COOL:
You yourself mixed up the different possibilities :-)

I didn't know it is possible to use Rhino materials in nXt...

I think it is a bug, it should change the mapping orientation.

You are not doing anything wrong. 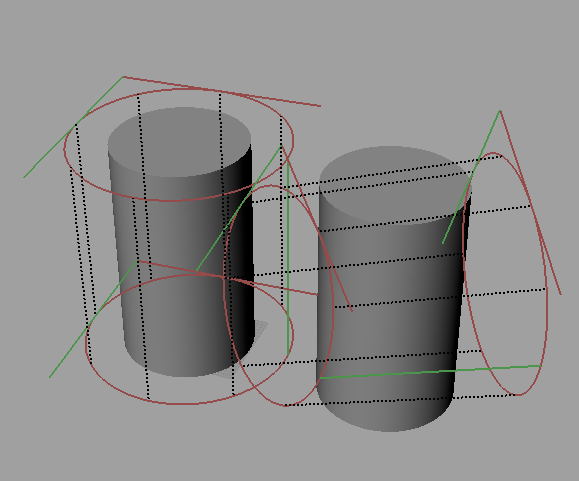 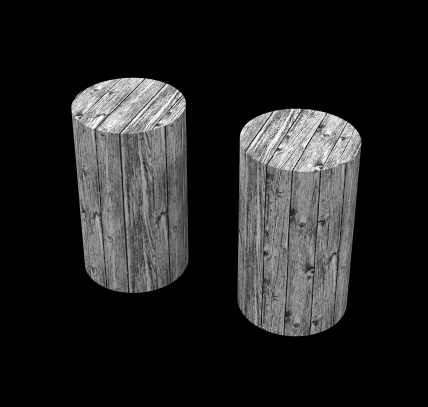 I now realized the built-in mapping tools in V5 do not apply to nXt at all!

In Properties, I have to hit the button 'Flamingo nXt', and then I find an other set of mapping tools.
They do work so far.

And even more confusing is the fact that there is no preview in the Rhino viewport.
Is that something that will come or do we really have to live with grey objects? If so, it's hard to explain why nXt is better than the Rhino renderer in V5.